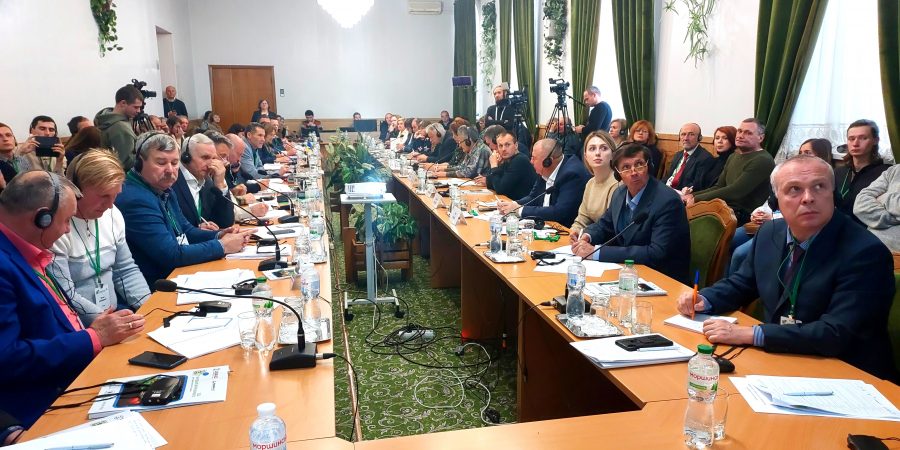 At the end of last Year, the Public Farmer Forum Toward Rebuilding Ukraine took place in Kyiv.

The purpose of the Forum is to include small farmers’ and peasants’ problems in the agenda of the President, Government, and Parliament of Ukraine, to establish a political platform for the inclusion of peasant and farming households into the Plan for the Reconstruction of Ukraine as an equal player in Ukraine’s food system, to develop and implement further steps for the development of the food system at the local level and the sustainability of the state democratic system.


On the second day of the Forum, November 16, 2022, its participants met with farmers and peasants of the Nalyvaikivsky Starostynsky District of the Makariv territorial community, Buchansky district, Kyiv region, who were under occupation by Russian troops.
The first in the program of meetings was the farm “Svitanok” (Pochepin village, Makarivska amalgamated territorial community, Kyiv region). The head of the farm is Mishchenko Ivan Dmitrievich. The farm “Svitanok” was founded in 1992 and has a land use area of about 100 hectares. The farm specialized in growing grain crops and keeping animals. By the beginning of the war, the farm kept about 100 heads of pigs and 52 heads of cattle. After liberation from the occupation, only 9 pigs and 13 head of cattle remained, as well as destroyed warehouses, farm premises, agricultural machinery and a private house. Both the fields and the territory of the farm were mined. When the animals returned home, they were blown up by mines laid.
The next meeting place for the participants of the second day of the Forum was the family micro-processing rural enterprise CRAFTSAD of the family of Alexander and Lesya Slobodian, which specializes in craft production of distillates, authentic Ukrainian tinctures, cider, calvados. The raw materials for their production are grain, apples and other fruits and berries, which they buy from the farm “Svitanok” and other neighboring households and farms. Dedication gave its results – the farm created two author’s drinks – “Caraway” and “To borscht”, which were highly appreciated by consumers. Their home, distillate laboratory and outbuildings are completely destroyed. But the family is determined to resume their production and home. As they explain, their decision strengthened the dialogue that took place at the Forum, in particular the need to restore economic ties between small producers of craft spirituous drinks and agricultural producers at the local level. In particular, this was emphasized and Kateryna Lavrenova, Head of the Ukrainian Craft Distillers Association, who was also present at the meeting. Oleksandr and Lesya, as members of the Ukrainian Craft Distillers Association, took an active part in the development of draft laws No5311 of March 29, 2021 and No. 5762 of July 14, 2021, aimed at introducing the legal framework and regulation of the work of rural microenterprises, which are specialized in craft production distillates (spirituous drinks). drinks
Household of Oleksandr and Lyudmila Savran was the third in the program of the second day of the Forum. The household was located on the territory of active hostilities and is typical for the Ukrainian agrarian structure, which has more than three million such households. They run the household on 1 hectare of land, keep 3 cows and poultry. They have 6 hectares of land for shares, which are leased to the agricultural enterprise “Agrobud”. For these 6 hectares of shares they received grain for keeping cows and poultry. They sell their products on the market in urban village Makarov. Their house was destroyed, but they are determined to gradually restore it. They confirmed the effectiveness of volunteer assistance, for which they were provided with a temporary modular house. But they noted the lack of consistency in such measures, in connection with which they emphasized the importance of dialogue between small producers and all social forces and the expediency of solving the problems of small producers within the framework of the National Platform.

The importance of forming an effective vertical of power was one of the issues that was discussed in the courtyard of the household of Gladka Olena, the quadruple according to the program of the second day of the Forum. Olena, together with her husband Alexander, solve the problem of restoring a destroyed household and a residential building. To help parents from the city to the village, their son returned, who was a dentist. The financial basis of the recovery is small savings and money from the sale of their products. They keep three cows and one heifer, which they collected back around the village after returning to their yard of household. They run household on 2 hectares of land. They lease 5 hectares of land of shares to the agricultural enterprise “Agrobud”. They receive the grain for the lease agreement, which is used for animal and poultry feed. They do not have their own agricultural machinery, and on a fee basis, they order these works from other households and farmers. Olena says that she sells dairy products on the local market on and one day trades in Kyiv. On these markets she has regular buyers, who trust her products. Before the war, she was in active contact with government agencies on state support. Olena and Alexander are trying to use the possibilities of various types of assistance. So, earlier, for a state subsidy, they purchased a milking machine and two calves. After the liberation, the gas service restored damaged gas pipes with a meter for the house, a technical passport for a destroyed residential building at state expense. At state expense, a technical report was made for the destroyed property also. This family household supports the creation of a National Platform for Family Farms, including to use opportunities for local interaction. Separately, he emphasizes the need to control at the local level the issues of land use and plowing. Among the local problems, there is a lack of area for grazing in the village. Olena is optimistic about the future and notes that working on earth is their way of life.
At the end of the second day, the Forum participants had a meeting with the headman of the Nalyvaikivsky starostynsky district Margarita Terekhova, who thanked them for their attention to small producers in rural areas. She stressed that the rural family farms of the Nalyvaikivsky Starostynsky District are socially responsible. They sowed and grew crops, helped the Armed Forces of Ukraine not taking into account the difficulties of the war. At the same time, she noted the priority tasks in her district, which are concluded in restoring of destroyed and damaged residential houses, so that the affected people winter in warm buildings. She concluded that she hopes that the visit of the Forum participants will help not only the producers of its district, but also all small producers of Ukraine.
President of AFZU, Viktor Goncharenko noted the fact that there are hundreds of thousands of such farms and households, which are visited by the Forum participants in Ukraine today. Even in the conditions of this war year, they did not stop production and provided the population of the country with food. Accordingly, he offered to apply to the President of Ukraine Volodymyr Zelenskyy, to the Prime Minister of Ukraine Denys Shmyhal with a proposal to introduce a differentiated approach to the distribution of state aid funds for recovery in order to support small agricultural producers.
As a result, the participants of the second day of the Forum, taking into account the state of affairs among small agricultural producers of the villages of Nalyvaykivka and Pochepin, Nalyvaikivsky Starostynsky district of the Makariv amalgamated territorial community, Buchansky district, Kyiv region, emphasized the expediency of systematically solving the issues of development of family farming in Ukraine. For this, it is significant to take into account world trends, in the context of which it is important to join Ukraine to the events of the UN Family Farming Decade (2019-2028) and the government’s approval of the National Action Plan for the Development of Family Farming in Ukraine. And one of the main tools for coordinating all measures for the development of family farming is the formation of the National Platform for Family Farming.

The information was prepared based on the materials distributed by Ukrainian Rural Development Network.