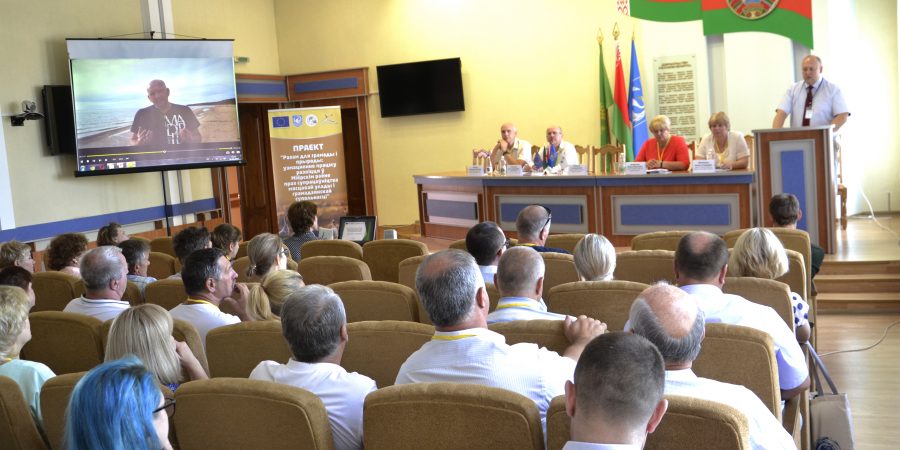 The project “Together for Community and Nature: Strengthening of Development Process in Miory District by Partnership of Authorities and Civil Society” have started in Belarus

June 26 this year in Miory Regional Executive Committee held an introductory workshop and press event in the framework of the project “Together for Community and Nature: Strengthening of Development Process in Miory District by Partnership of Authorities and Civil Society.” The project, which is designed for three years, implemented by local authorities in collaboration with the NGO “BirdLife Belarus (APB)” (Minsk) and the Latvian Rural Forum (Riga, Latvia).

Miorsky area is a corner of the Belarusian Lakeland. On its territory there are about 100 lakes, as well as a unique nature object in Belarus – bog Yelnya – one of Europe’s largest raised bogs, whose age is about 9000 years old. Every year there are collected 500 tons of cranberries here, people watching hundreds of species of birds including tens of thousands of cranes during their migration.

An informal Project slogan “Think globally – act locally” is taken as a basis for the concept of sustainable development of the area in which the three main components are: nature (savings potential use of wetlands), economy (support for small businesses) and social dimension (improving the quality of life of local residents).

Much attention in the project “Together for Community and Nature: Strengthening of Development Process in Miory District by Partnership of Authorities and Civil Society” is given to trainings. To do this, we planned numerous seminars, workshops, information sessions, a number of environmental and educational activities for volunteers, guides, artists, locals, farmers, owners of agrotouristic sites and other stakeholders. In order to study the best practices in the field of sustainable development information and training trips to European Union countries are planned.

One of the components of the project is development and promotion of local brand “Cranes and Cranberries of the Miory region.” Since 2012 the festival under this title every autumn brings together people not only from the district and the region, but also from across the country, and it is known among foreign lovers of rural tourism. Also, local festivals will be held in the framework of the project to Disna town and in Perabrodze village.

As for the social work, the project provides creation of sports fields and camping, purchasing of an ambulance car, construction of the nature observation towers, extension of ecological trails in Yelnya, landscaping of “Peninsula” site in Miory – the main area of the town for public events and so on.

200 thousand euros will be allocated for implementation of 10 local initiatives, two of which will receive 60,000 euros, the rest – for 10 thousand each. According to the plan, it will serve as an impetus for the development of entrepreneurship in Miorski District for those who have good ideas, but does not have the financial ability to implement them.

The implementation of the above measures will contribute to the major objectives of the project: an increase in activity and the expansion of the inclusion of the population of Miory District to the preservation of the unique natural potential of the region, strengthening the capacity of local authorities and the management of sustainable participative development in the District, increase the level of social infrastructure and small businesses in the area.