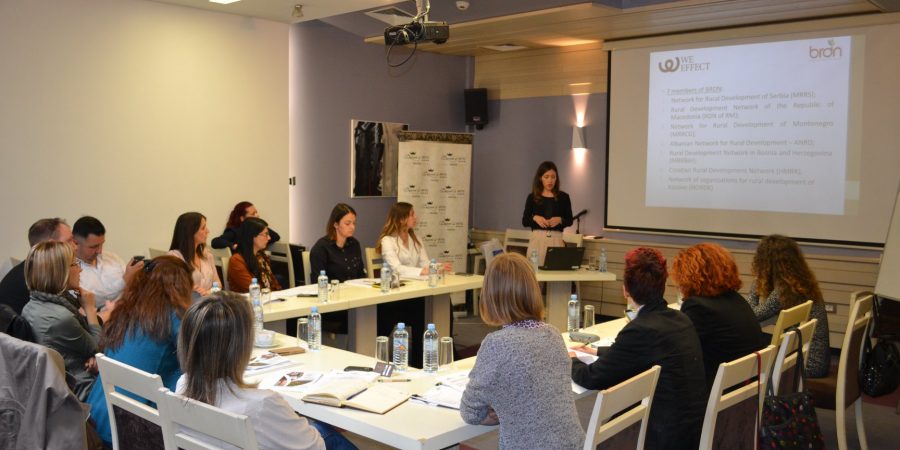 In order to advance gender equality within the Balkan Rural Development Network (BRDN) and among rural communities in the Balkan countries, a Gender Equality Hub was formed to function within BRDN, having a twofold role: gender mainstreaming within BRDN, and promoting the gender concept among rural populations in order to create awareness regarding the important role of rural women in decision making within the household and strengthening negotiating power of women in the rural society

The Gender Equality Hub consists of members nominated by each of the BRDN member organizations. During their initial meeting held in Skopje last year, the members discussed about the Hub’s priorities and activities to be implemented in a two years period. The following priority was accepted by BRDN members to be included in the overall BRDN strategy:

Taking it as a baseline against which to design future activities, the BRDN members introduced the Gender Equality Hub as one of the professional teams to function as part of the BRDN’s Executive Body.

In the period from April 15th till April 17th, 12 members of the Gender Equality Hub gathered in Skopje, Republic of North Macedonia for a training on Gender Equality. After developing the capacities on gender equality and gender mainstreaming concepts, the Gender Equality Hub will work on preparation of BRDN communication and gender mainstreaming policy which will support the improvement of the Hub’s Action Plan and help the integration of the gender initiatives into the overall strategy of BRDN.