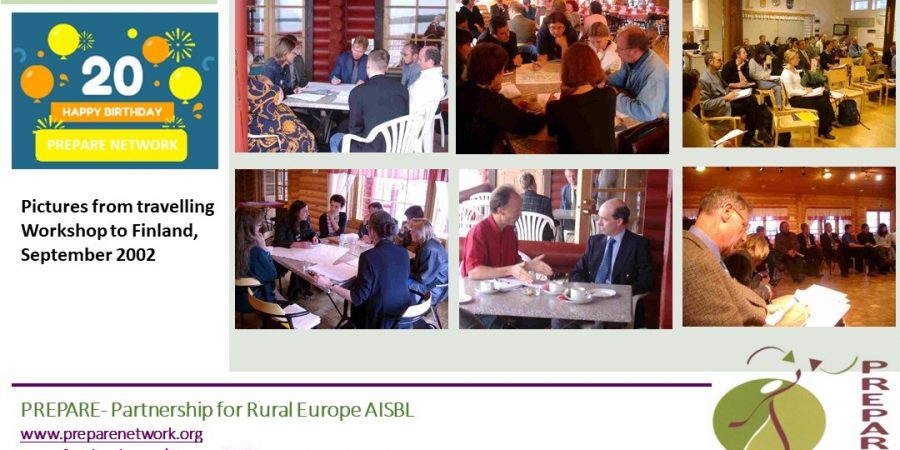 The PREPARE Travelling workshop to Finland on 6-9 September 2002, the third one in the series, following Estonia/Sweden in 1999 and Hungary in 2000, had a greater emphasis that these earlier workshops upon governmental approaches to rural development. Finland offers a remarkable example of determined action by government and rural people to pursue an effective nationwide programmes of rural development.  At that time (early 2000), the key elements of the Finnish system included:

– the Village Action movement, with small groups working at local level all over the country, linked to each other through county-level groups and the national Village Action Association

– determined use of both national budgets and EU funds through a nationwide pattern of Local Action Groups.   These were based on the LEADER model, but were variously funded by EU funds or national funds (POMO).

During the workshop the participants visited the Ministry of Agriculture and Forestry in Helsinki, the Village Action Movement (SYTY),  the Regional Council of Ostrobothnia,  POMO, the national programme in Ostrobothnia, the Local Development Partnership in the Kaustinen Subregion, the Leader+ programmes in the Middle Ostrobothnia, the village of Eskola (nominated the Village of the Year 2001 in Finland), took part in the Middle Ostrobothnian Village Days and a meeting with the Finnish NGOs. Key persons from these organisations where giving lectures and taking part in discussions with the participants.