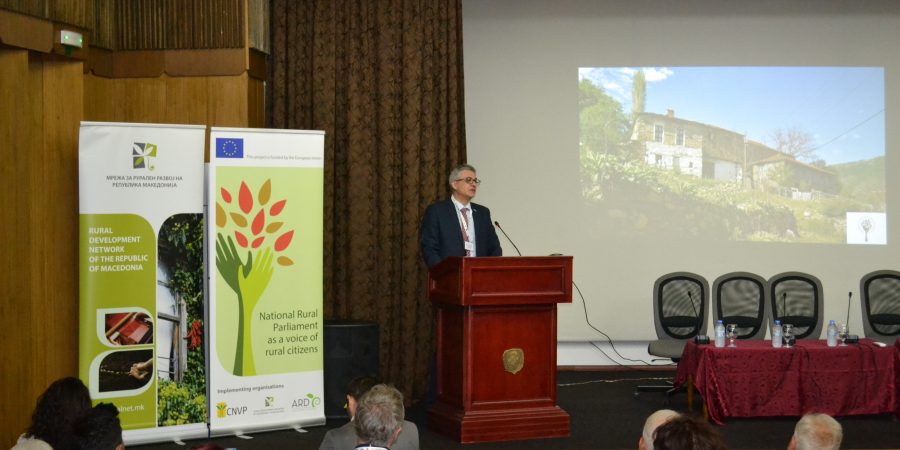 First National rural parliament in the Republic of North Macedonia

The First National Rural Parliament was organized in the Republic of North Macedonia in the period between 12 and 14 June 2019, following the positive example of the European countries, which have been organizing rural parliaments for many years as an efficient process to foster an inclusive discussion among the rural population and the policy makers for the purpose of improving rural policies and to address certain challenges related to rural development.

More than 90 representatives of local civil organizations, international organizations, the business sector, the local self-government, the National Extension Agency, and the Ministry of Agriculture, Forestry and Water Economy met in Krushevo for the First National Rural Parliament in North Macedonia, having an opportunity to share knowledge and experience in various topics related to rural development through panel discussion and working groups. The goal of the Rural Parliament was to offer rural civil organizations a national platform to be actively involved in the creation of rural development strategies and policies at national and local level.

The First National Rural Parliament was the final event to complete the three year project “National Rural Parliament as a Voice of Rural Citizens”, supported by the EU and implemented by three organizations: CNVP – Connecting Natural Values and People, RDM of RM – Rural Development Network of the Republic of Macedonia and ARD – Action for Rural Development. In addition to the addresses of the President of the Rural Development Network – Petar Gjorgievski and the Project Manager and CNVP Director – Anela Stavrevska Panajotova, presentations and addresses were also given by the Chief of Cabinet of the Minister of Agriculture, Forestry and Water Economy – Trajan Dimkovski, the Krushevo Mayor – Tome Hristoski, a Rural Development Expert – Sofija Davidova, the PREPARE President – Aris Adlers, the General Secretary of the Standing Work Group for Rural Development of Southeast Europe SWG – Boban Ilic, as well as by Stole Georgiev from the Local Action Group Plachkovica and professor Jorde Jakimovski, PhD from the Institute for Sociological, Political and Juridical Research.

‘The goal is to include all these organizations that could help in policy creation, since the state cannot establish priorities in each and every municipality. Each planning region has a different priority, so civil organizations could be a good partner of the state in designing the policies’, stressed Anela Stavrevska Panajotova, CNVP Director.

Conclusions and recommendations adopted as a result of the group work were further included in the final product – the Manifesto of the National Rural Parliament. This Manifesto, to be officially submitted to the Ministry of Agriculture, Forestry and Water Management, as well as to other relevant institutions, provides the major directions and priorities to guide rural policy.

The First National Rural Parliament ended by field visits, in the course of which participants had  the opportunity to see positive examples for rural entrepreneurship, rural and alternative tourism, natural potential and resources in the regions of Prespa and Mavrovo-Rostushe, as well as to taste specialties of the traditional Macedonian cuisine. These meetings provided opportunity for sharing experience with the rural population and for exchanging views and opinions regarding sustainability and welfare in rural areas.